The La Liga side have already moved to check if it’s ‘viable or not’ to land the right-back.

From the discussion, Ronald Koeman’s side have figured out the transfer would cost between €20m and €25m.

Sport state the figures quoted are ‘unaffordable’ for Barca, as they are waiting to sort out Nélson Semedo’s future.

The Spanish side wanted to sell their right-back to Manchester City after his poor performance in their 8-2 defeat against Bayern Munich in August.

Semedo’s agent Jorge Mendes was interested in taking his client to Etihad, and Barcelona would have taken João Cancelo and Eric García as a part of the deal. The exchange operation involving these three players was viewed well at the Camp Nou. 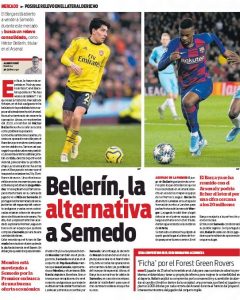 However, Lionel Messi’s desire to join Pep Guardiola’s side stopped all operations between the two clubs.

Koeman’s side are looking to offload Semedo, and Mendes is trying to find a new club for his client in the Premier League.

If the Portugal international ends up leaving, it would open the door for Barcelona to sign Bellerín this summer.