Crystal Palace are now eyeing a move for former AS Roma coach Paulo Fonseca but face competition from Fiorentina for his signature.

That’s according to Corriere Dello Sport, who say that the Portuguese coach is ‘receiving the attention’ of Crystal Palace after they missed out on Lucien Favre.

Palace are on the hunt for a new boss to replace Roy Hodgson and had looked set to appoint Favre before he elected to remain out of the game for a longer period of time.

The sudden turnaround has left the Eagles scrambling to find an alternative, and the latest name on the list is Fonseca.

He was close to Tottenham earlier this summer and had looked set for the move, but they elected to go in a different direction at the last minute, leaving him looking for alternative options.

That could now be offered up by Crystal Palace, but they are facing competition from Fiorentina, who are also ‘in contention’.

They ideally want Vincenzo Italiano, but he’s proving difficult to get and so Fonseca is the alternative option for them. 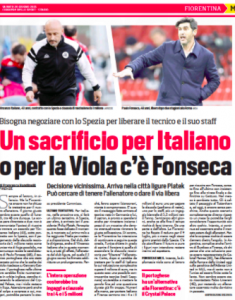 Fonseca was an option for them before their ill-fated appointment of Gennaro Gattuso, and the club’s hierarchy are working to restore the relationship.

It’s felt his rejection by Tottenham could make him look at Fiorentina’s offer with a different eye and consider the move.

He does have an ‘alternative’ option in the shape of Crystal Palace, though, who may want to move quickly in case Fiorentina pip them to the post.