On Wednesday, we covered a report from Brazil saying Arsenal were stepping up their interest in Bruno Guimarães and could make a bid for the midfielder this week.

Following a €20m bid made by Benfica, it’s been claimed the Gunners could offer €25m or €30m in order to win the race for the Athletico star.

We pointed out that Arsenal’s interest could’ve been used to force the Eagles to raise their bid for the player, but it turns out they’re too smart for that.

Two Portuguese newspapers have interesting takes on this situation today. A Bola says Athletico have been ‘playing’ with Arsenal interest, and that’s what convinced Benfica to make their last bid, of €20m. 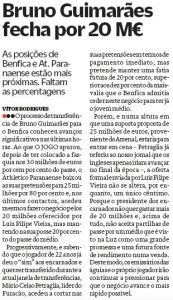 And newspaper O Jogo says Benfica aren’t raising their offer. They claim that despite the news of a new bid for Arsenal, the Eagles aren’t putting an extra cent on the table, and will keep bidding €20m.

It shows that Benfica aren’t really believing this Arsenal story. And now all we have to do is wait and see if this offer from the Gunners will arrive or not.