Having surprised everyone by signing Boubacar Kamara from Marseille on a free right under the nose of Champions League playing club Atlético Madrid, Aston Villa have shown they mean business this summer.

Finishing 14th in the Premier League hasn’t stopped them from acting swiftly on the transfer market, securing the services of the aforementioned Frenchman, which came after a €20m deal for Philippe Coutinho and before a €30m or so purchase of Sevilla’s Diego Carlos.

The Villans might have to make a couple of sales to balance the books, and one of the players primed to leave this summer, at least when it comes to his contractual situation is Douglas Luiz.

The midfielder, despite being a regular under Steven Gerrard, has just one year left on his Villa Park contract, and remains a fervent desire of José Mourinho’s at AS Roma. 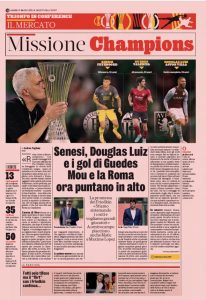 Recently winning the UECL, the Serie A side want to keep growing, with a new midfielder key to their plans, which is where the Brazilian comes in.

Gazzetta dello Sport look at this on Friday morning, stating the Aston Villa player is ‘in pole position among the possible midfielders’.

It’s believed the Brazilian would cost ‘about €30m’, and is ahead of the likes of Granit Xhaka and Lille’s Xeka in terms of preference.

Could it be that Kamara’s arrival on a free paves the way for Luiz’s exit? AS Roma are seemingly hoping that’s the case.