A couple of weeks ago, it was revealed that Arsenal, always looking for the next big thing, were keeping an eye on Ismaël Doukouré.

The young defender, currently at Valenciennes in Ligue 2, has taken France’s second-tier by storm by breaking into the first-team and impressing.

Labelled the next Dayot Upamecano, mostly due to the position he plays in and the fact they both played for the club at a young age, 17-year-old Doukouré is attracting a lot of attention.

La Voix des Sports take a look at it on Monday and list them all, naming the likes of Barcelona, AS Roma, Juventus, Benfica and a bunch of others, as well as Arsenal.

The main point of the article was to work out how much he would be available for, considering Upamecano was sold for a measly €2.2m back during the 2015-16 season. 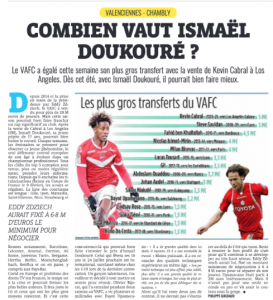 Taking into account the Covid-19 pandemic and the fact Valenciennes aren’t the richest club to start with, it’s said that their president, Eddy Zdziech, has ‘fixed a minimum of €6-8m’ to open talks for his ‘phenomenon’.

Incredibly affordable, and following the success Upamecano has found over the years and how well the last young Frenchman to make the swap from France to the Premier League (Wesley Fofana) has done, it would be foolish not to look into a deal.

Then again, we all know how William Saliba’s transfer has gone so far, so it remains to be seen whether it’s a deal Mikel Arteta would give the green light to.