Ever since Leeds United looked in a comfortable position to get promoted back to the Premier League, transfer rumours about their summer plans have swirled.

Due to Marcelo Bielsa, a lot of the attention has been on moves potentially involving South American players, and yet a few whispers about potential bids for players in Europe have started emerging.

The latest has been for Jonathan David, currently at KAA Gent, who wants to leave the Belgian club for pastures anew this summer, and preferably Lille in Ligue 1.

The Jupiler Pro League side’s chairman, Ivan de Witte, told De Zondag, relayed by Voetbalkrant, ‘contacts’ with the French club had ‘come to a halt this week’, before revealing that other clubs were interested ‘with much better proposals, including Leeds’.

As things stand, David wants to move to the north of France, making that abundantly clear when speaking to L’Equipe, who also held an interview with Lille’s owner, Gérard Lopez, on Monday. 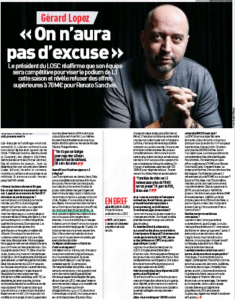 Asked about their interest in David, he said: “The player absolutely wants to play for LOSC. He doesn’t want to go to another club. Our team is made for players of his character. Everything will depend on those in charge [at KAA Gent]. We may review our offer in the coming days”.

For now, Lille have ‘only’ offered €25m for the Canada international, a fee which Leeds would be more than likely to match and even surpass.

But, and it’s a big one, Bielsa’s side certainly have some catching up to do in terms of the player’s will, because he seems set on moving to Ligue 1, meaning those in charge at Elland Road may have to pull out all the stops if they want to realistically land their target.

Player ‘speaks with Swansea City’ – Not clear if manager decision...