That Manchester United are interested in Kalidou Koulibaly is far from being new.

The Senegalese defender has been linked with a move to Old Trafford for the past few years, but, so far, he’s stayed put at Napoli, where Aurelio De Laurentiis has made sure offers never reached his player.

This year, however, with the financial crisis caused by the Covid-19 pandemic, things could be different, and the newspapers seem to be in agreement that a departure is very much on the cards.

Gazzetta dello Sport have been the ones pushing it the most, continuing to do so on Thursday.

According to them, Koulibaly is ‘very intrigued’ by a move to the Premier League, where both Manchester clubs and Liverpool would be interested. 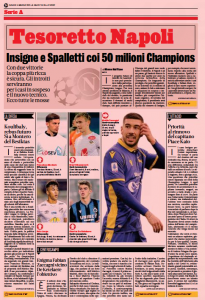 As we’ve said in the past, it makes little sense for Manchester City to be keen a year after spending so much on centre-backs, while Liverpool still appear to be angling for Ibrahima Konaté if they can.

It’s made clear that tif Koulibaly were to ‘insist’ on leaving, De Laurentiis ‘accommodate him’ by letting him go for the right price.

On top of that, letting him go would free €12m in yearly wages for Napoli, giving them financial breathing room going forward.

That’s good news for Manchester United, who are still looking for the best partner for Harry Maguire.