A couple of days ago, it was reported that Bayer Leverkusen had joined Milan in the pursuit of Tottenham defender Serge Aurier.

The Ivory Coast international appears to be on his way out from the London club this summer if the right offer comes along, and there was a belief the Serie A side could have a clear run at him.

However, that has now changed, despite all the previous articles claiming he’d already given his yes to a move to Italy, as Bayer are spoiling the party.

So much so, in fact, that Corriere della Sera on Monday are reporting the Bundesliga cub have ‘overtaken’ Milan and the Aurier objective is now ‘fading’. 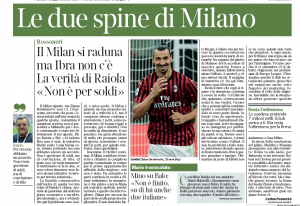 There isn’t much more detail than that, but it appears, at least from what the Italian newspaper are saying, that either Leverkusen have made the right-back a better offer or that he simply prefers a move to Germany over Italy.

We’ll have to wait and see, but what once looked like an easy deal to complete between Tottenham and Milan now appears much more complicated.