Home Europe Liverpool told an offer around €50-60m will be considered for attacker –...
SHARE

Chelsea have agreed a deal with RB Leipzig for Timo Werner, who was previously heavily linked with a move to Liverpool.

Just how serious Reds interest was is debatable, but Werner moving to London has led to English claims of renewed interest in Barcelona’s Ousmane Dembélé.

It was explained the Merseyside club would consider signing the World Cup winner on loan or a permanent deal, if they decide to bolster their attacking division.

These claims have bene picked up by Mundo Deportivo and they provide the La Liga winners’ stance on the France international in today’s edition.

‘Barca’s position with Dembélé is realistic’, states the report and with two years left on his contract at Camp Nou, the leaders of the Spanish side have started to reflect on the winger’s future. 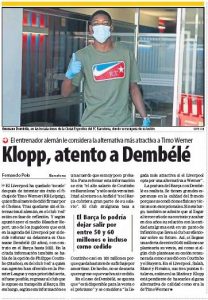 Therefore, if an offer around €50-60m arrives for the player, Quique Setién’s side would consider his sale this summer. In addition to this, Barca are also open to a loan deal with an option to buy.

This is sending a very clear message to Liverpool and any other clubs potentially interested in the Frenchman.

Roberto Firmino, Sadio Mané and Mohamed Salah, who are the first-choice attackers at Anfield, are 28 years of age and Mundo adds Jürgen Klopp is in search of young, quality alternatives.