With Liverpool recently being linked to Porto star Luis Diaz, the winger’s visit to Anfield this week was of course watched carefully by many people.

The English press then had several stories about his performance, believing he had a good display, and those pieces found a big echo in the Portuguese and Colombian media.

Newspaper Record is one of the many with an article about it today, taking the English stance as Klopp’s ‘approval’ for Diaz’s transfer, saying he was ‘delighted’ with the 24-year-old.

And it turns out they also bring their own view on the chances of a move next year.

The outlet makes it clear that Diaz is protected by an €80m release clause in a contract which runs until 2024, with Porto willing to keep the player until the end of the season. 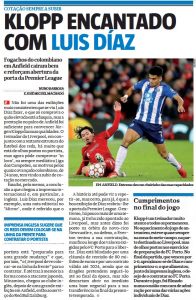 Now what sounds good for Liverpool is that the Dragons ‘do not rule out’ the possibility of finding the basis for deal now so the player can move in the summer. That seems to be a way the Reds wouldn’t need to trigger his release clause to beat competition early.

Record recalls that other Premier League sides such as Everton and Newcastle United have also been recently linked to Diaz.

It’s said the Toffees ‘stayed far’ from reaching Porto’s demands for the player, while the Magpies interest is something more recent, reported after the club’s takeover. 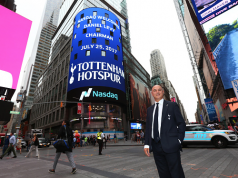