Portuguese newspaper A Bola today has a little message for Arsenal or anyone else who comes after Sporting striker Tiago Tomás in the summer.

The reason for their story is that on Thursday, Italian outlet Gazzetta Dello Sport had a piece praising the 18-year-old’s potential.

They highlighted the youngsters qualities, and instead of listing any Serie A clubs who’d like to sign him, all they did was give Arsenal a mention.

So A Bola have their own take on it, and when speaking of the Gunners interest, they make it clear that Sporting aren’t willing to sell the striker so soon. 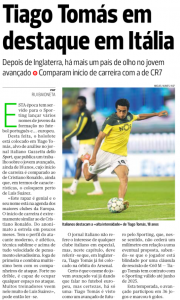 Tomás is protected with a contract running until 2025 and a release clause worth €60m. A Bola says Sporting won’t give in ‘one millimetre’ in case a bid comes, since they have big faith in his future.

Despite being only 18, the youngster has already managed to be an important piece for the Lions. He’s played 36 games this season, with six goals scored, and is helping the club to fight for a league title after so many years.

Arsenal have been warned.