Joost van Aken couldn’t be much more out of the picture at Sheffield Wednesday.

He hasn’t played for the Championship club since August and his last appearance on the bench came against Swansea City in December. An exit looks the obvious solution for the 24 year old, and as soon as possible, and luckily there’s interest in a transfer.

Monday’s edition of De Telegraaf reports PEC Zwolle are keen on getting the player in for their new manager Jaap Stam, and the Dutch newspaper explains that ‘patience’ is going to be needed.

PEC want to sign Van Aken on loan until the end of the season, but at this stage it’s said to be unclear whether Sheffield Wednesday will ‘cooperate’ with that plan.

The reason behind that is Steve Bruce, according to De Telegraaf. 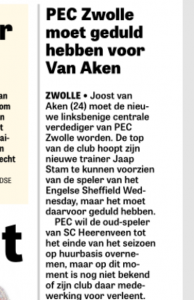 With the former Manchester United defender set to take over as manager of the Yorkshire club in February, it’s thought he’s currently assessing his squad options.

So despite Bruce only taking over next month, he’s currently deciding who can stay and who must go, and until he’s decided on Van Aken, PEC Zwolle won’t get an answer.