It turns out that Sporting are reportedly making more money with Rui Patrício’s transfer to Wolverhampton Wanderers now than they intially expected to.

This is story is published by Portuguese newspaper O Jogo today, claiming that from the €18m the Premier League side will pay for the goalkeeper, €14m will go to the Lions.

When Wolves and Sporting started negotiating at the end of the last season, the transfer would also be worth €18m, but €1m would go to Patrício and €7m to agent Jorge Mendes, to pay off an old debt, leaving the Lisbon side with only €10m.

Now as widely reported, Patrício and Mendes have given their share, making things a lot easier for the clubs to find a new deal. 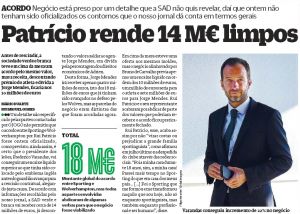 O Jogo claims that the agreement still hasn’t been made official because of one detail left, although they don’t seem to know what is it for now.

We’d hazard a guess it’s Mendes and Gestifute realising that they do actually want their money and would either like it now, killing O Jogo’s claims, or want a cast iron guarantee of getting it fairly soon.

Patrício’s stance on the case continues to be widely praised, as he didn’t turn his back on the club he spent so many years at.