The Croatian is out of favour at Anfield and currently finds himself at the bottom of the pecking order under Jürgen Klopp.

He’s subsequently been linked with a move all summer, with Roma the team most heavily linked to his signature. However, earlier negotiations between the two clubs broke down and that appeared to be that.

Not according to Gazzetta Dello Sport who say Lovren is back on the table as far as Roma are concerned.

The Serie A side want to add a centre back to their squad this summer after selling Kostas Manolas to Napoli. 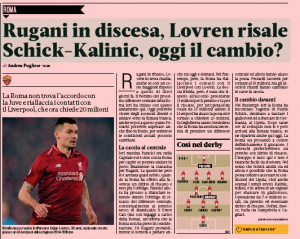 They’re yet to do that and are struggling to agree a deal with Juventus for Daniele Rugani so have now turned their attention back to Lovren.

Gazzetta say Roma have re-established contact with Liverpool over a move, but the Reds have now changed their stance and are demanding more money for the Croatian.

According to the newspaper, the two clubs had a previously agreed a loan deal which would see Roma pay €3m for a loan and then €12m at the end of it, so €15m overall, but Liverpool are now asking for €20m.

They know Roma are desperate for a centre back so have raised the stakes. Now sporting director Gianluca Petrachi will try and negotiate Liverpool back down to €15m before the end of the window in six days.