Having missed out on Champions League by finishing 6th in the league, Manchester United were always going to be the centre of attention this summer, especially when a lot of their players ended up having to take wage cuts for their failure to qualify for Europe’s elite competition.

Among those is Paul Pogba, who, despite scoring 16 goals and assisting 11 times from midfield this season, managed to provoke the ire of a large chunk of the Red Devils’ fanbase through some perhaps tired performances towards the end of the campaign.

The return of Zinedine Zidane at Real Madrid allowed for a lot of transfer rumours to write themselves, yet the Italian media continue to push the idea of a return to Juventus for the Frenchman.

In fact, Corriere dello Sport report on Monday that Fabio Paratici, who was in Turkey on Saturday evening to watch Turkey beat France 2-0, made contact with the Manchester United midfielder after the game.

The conversation was simple, and the 26-year-old allegedly told the Juventus sporting director he would be open to returning to Turin if the opportunity presented itself. 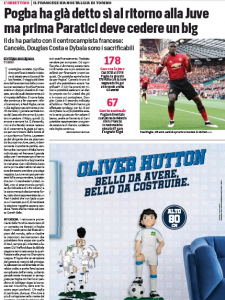 However, that last part could be problematic, as it’s been made rather clear Manchester United aren’t interested in selling their star, and if they do, they will want a lot of money for him (at least €150m).

For Juventus, that figure is impossible to meet straight away, meaning they will need to sell before buying, with a number of sacrificial lambs in mind to achieve their goal.

After that, things get a bit trickier, with both Douglas Costa and Paulo Dybala mentioned, but their lacklustre seasons make them difficult assets to shift, especially at a high price.

Corriere dello Sport do mention that Manchester United have enquired a few times about the Brazilian in the past, perhaps hinting the Premier League side could be interested in having the forward included in the deal to lower Pogba’s asking price.

That last part was just us applying logic to the whole thing, but off the back of buying Cristiano Ronaldo last season, another €100m+ transfer commanding hefty wages heading to Turin is unlikely, as their funds simply aren’t as plentiful as the other big powerhouses vying for European glory to allow it two years on the trot.