Bayern Munich have ‘made a new approach’ to Chelsea centre-back Andreas Christensen but are facing issues in convincing him to move to Bavaria.

That’s according to SportBILD, who say contacts are ongoing between his agents and those in charge of the German giants.

As we’re sure you’re aware by now, Christensen’s current contract with Chelsea is set to expire in the summer, and there’s no indication he will extending his deal at Stamford Bridge.

That means he is free to negotiate a free transfer for the summer with any European clubs he wants to, and there is a long line of suitors.

Bayern Munich have been named as one of them on numerous occasions, with them needing to replace Niklas Sule, who has elected to join Borussia Dortmund.

SportBILD pick up on their interest today and state that those in charge at the Allianz Arena have ‘made a new approach’ to the Chelsea defender.

According to their information, they have ‘lodged a long-term interest’ in the centre-back with his agency, but there is one problem; the offer is ‘too low’.

What makes things difficult is that Christensen’s deal is expiring, so he is free to hold contract talks himself and demand what he likes. Furthermore, he is ‘said to be closed to a possible charm offensive by Bayern’. 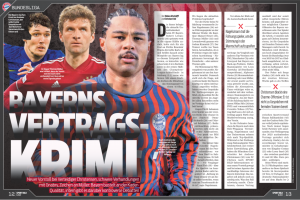 What that means is he’s ignoring any efforts by the Germans and wants to ‘concentrate entirely’ on Chelsea before now and the end of the season.

Thus, there will no talks with foreign coaches or managers for the time being. He is highly valued in Munich, though.

They believe he is reliable, has a good injury history and is strong in the build-up play. Furthermore, he has experience in the Bundesliga after his loan spell with Gladbach from 2015-2017.

The problem is he is ‘not cheap’, so there is work to be done on that front if they are to convince him into the move.