Even though it was the Argentine media who broke the news saying Edinson Cavani wanted to return to South America this year, local outlets had been losing their confidence in the past few weeks.

The striker’s recent form with Manchester United made it a lot likelier that he’d stay with the Red Devils for longer, and that slowly harmed Boca Juniors’ hopes of signing him this summer.

The Old Trafford side announced yesterday that Cavani has signed a one-year extension, and when checking the Argentine media today, we found exactly what we expected.

Newspaper Olé, who previously had a front page about the player’s chances of joining Boca Juniors, now features a very short story reporting the 34-year-old’s new deal with Manchester United, and suggests the Boca move will be possible in the future. 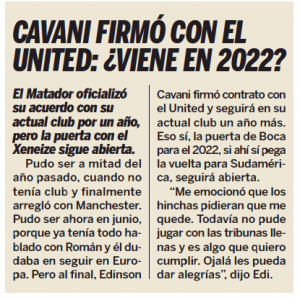 The newspaper recalls that Cavani had ‘everything spoken’ with vice president Juan Roman Riquelme, and asks if the striker would ‘come in 2022′, affirming that Boca Juniors’ doors will ‘remain open’ in case he decides to return to South America next year.

So regardless of how the player does at Old Trafford in the upcoming season, we can already be pretty sure that these rumours won’t take long to return.