Ousmane Dembélé continues to be linked with Manchester United as there is no clarity on his future at Barcelona.

The winger’s contract expires in 2022 and a renewal still doesn’t look close.

Over the weekend, journalist Gerard Romero stated the 24-year-old has refused to sign a new deal with Xavi Hernández’s side.

The Spanish club’s sources told Mundo Deportivo that there is ‘still no formal response’ from the former Borussia Dortmund man or his camp.

If there is no response in the next 48 hours, either ‘affirmatively or negatively’, Barca will interpret it as the player having no intention to commit his long-term future to the club. 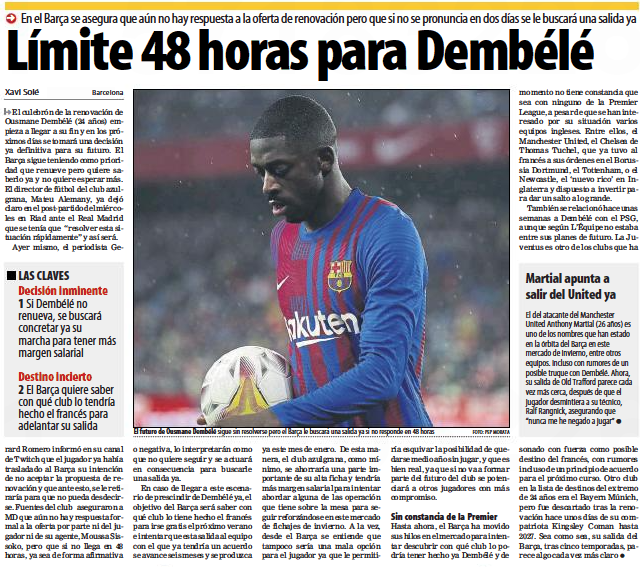 In the event the France international confirms his desire to leave or refuses to respond, then the Blaugrana’s objective would be to find out which club he has decided to join on a free transfer next summer and ‘try to advance’ his transfer to that club in January.

This would allow Barca to save on the player’s salary and also earn a fee from his sale in the winter market. Several English clubs, including the Red Devils, are named as suitors, but Xavi’s side have ‘no record’ of Dembélé having an agreement with any of the Premier League sides so far.

Over at Sport, they explain Manchester United and Juventus are the wideman’s ‘possible destinations’. Barcelona ‘knew in advance’, when negotiating for Dembélé’s renewal, that his agent has been ‘maintaining contacts’ with clubs across Europe.

The Camp Nou side are ‘informed’ that United and the Serie A side have been ‘increasing their pressure’ in ‘recent weeks’.  Sport even state that Dembélé’s ‘destiny’ could be one of United or the Turin club.

Juve can take advantage of the taxation laws in Italy to present the player a ‘significant net salary’ and Sport say this could ‘tip the balance’ in the Old Lady’s favour.