For the past few weeks, various reports from the Dutch press have continued to insist Ajax have an interest in signing Tottenham Hotspur’s Steven Bergwijn in the winter market.

The forward has seen his playing time restricted [partly due to injury] since Antonio Conte replaced Nuno Espírito Santo at the north London club, but the Italian has insisted he wants to retain the 24-year-old.

After recovering from an injury, the Netherlands international made his first appearance of 2022 against Leicester City earlier this week. Coming off the bench, he scored a brace in the extra time to help Spurs come from behind and beat them 3-2.

Algemeen Dagblad now explain that a few months ago, the Eredivisie winners made the attacker their ‘top target’.

The negotiations between the two sides have ‘not improved’ since Ajax sporting director Marc Overmars saw their bid rejected by the Premier League side. After his heroics against Brendan Rodgers’ side, Conte again stressed a desire to retain the player. 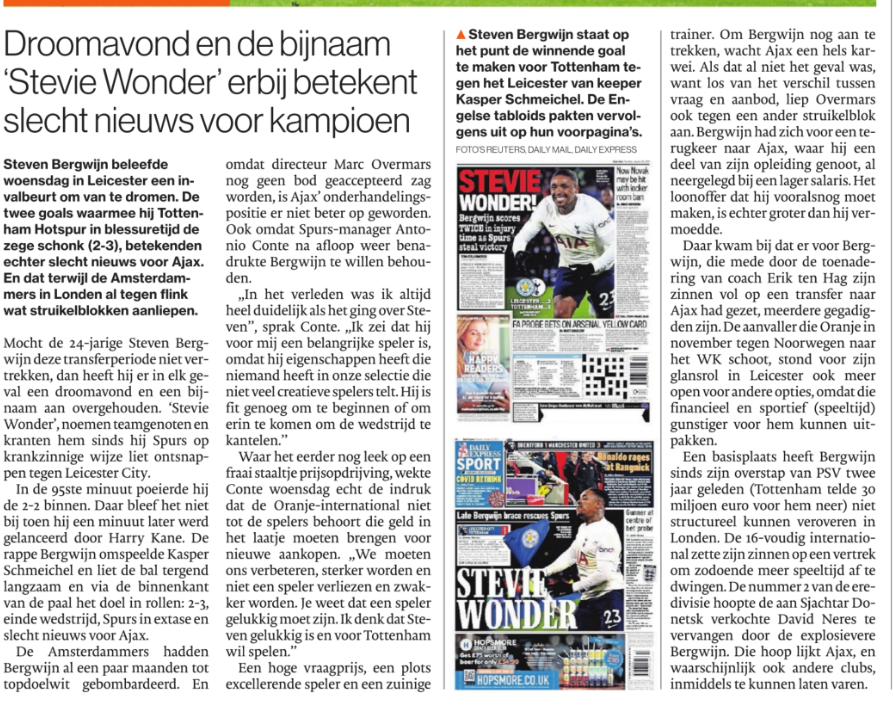 AD state a ‘high asking price, suddenly excelling player and a frugal trainer’ means that Ajax are in for a ‘hell of a job’, if they want the former PSV Eindhoven man to join them.

If all these factors, along with a difference in supply and demand was not enough, Erik ten Hag’s side have now ‘run into another stumbling block’.

Bergwijn had ‘set his sights fully on a transfer’ to Ajax, partly because of their manager. In order to join the Amsterdam club, he was ready to take a pay cut, but the sacrifice the player had to make, for the time being, is ‘greater than he suspected’.

Ajax hoped to replace David Neres, who was sold to Shakhtar Donetsk earlier this month, with Bergwijn. AD, however, claim the Dutch giants and his other suitors must ‘now abandon that hope’.