Because they’re so prominent on a day to day basis, stories about the Chelsea left-backs in Italy tend to be boring.

They rarely offer anything new, but when Corriere dello Sport dedicate nearly two pages to Napoli’s interest in Emerson Palmieri, it’s hard to ignore it.

The basis of their article is Gennaro Gattuso’s need for a man of the Italy international’s ilk, whom they started to evaluate ‘a few months ago’.

What helps in all this is the fact that Napoli ‘have a solid and very well cultivated relationship’ with Chelsea following the deals taking Jorginho to Stamford Bridge and sending Tiemoué Bakayoko to the south of Italy.

However, the Blues aren’t going to be as lenient with Emerson as they were with the Frenchman, as it’s made clear they would ‘like to sell outright’ when it comes to their left-back, or at a push an ‘onerous loan’. 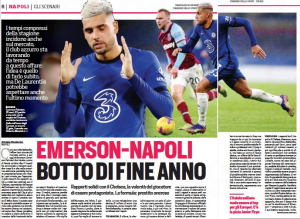 That’s a problem for Napoli, who are using a one out on in tactic in January, meaning they first have to figure out whether they can get rid of one of either Faouzi Ghoulam, Mario Rui or even Elseid Hysaj before making their move.

Reaching an agreement with Marina Granovskaia ‘certainly won’t be a problem’, but it’s all about offloading first, and therein lies the issue.

It’s certainly something to keep an eye on, as any movement in the full-back position exit wise in Naples in the coming weeks could quickly lead to Emerson heading the other way.