Over the past few days, Sport have had two reports explaining Wolverhampton Wanderers are the most interested club in signing Barcelona’s Jean-Clair Todibo.

The La Liga giants want to offload the centre-back in the final weeks of the transfer window, and Mundo Deportivo provides an update about other clubs who are looking to acquire his services.

According to the Catalan newspaper, Everton and Leicester City are interested in the 20-year-old.

It’s claimed Ronald Koeman’s side have received offers from both the Toffees and the Foxes for the defender.

The report doesn’t specify the details of the offers made by the two English clubs, but the proposals haven’t met Barca’s requirements. 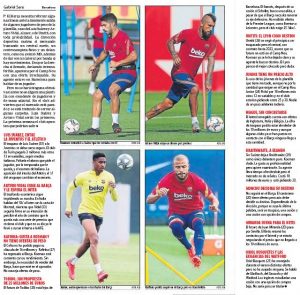 The Blaugrana, who are in the market searching for a new centre-back, are ready to offload the France U20 international, and are looking to raise €25m from his sale.

With Everton and Leicester proposals still short of Barca’s €25m demand, the Spanish side will now have to wait and see whether or not the defender’s suitors are willing to meet their valuation for signing Todibo.