On Thursday, we covered claims made by Marca that Sevilla rejected Newcastle United’s ‘second offer’ for Diego Carlos.

The Magpies are keen to sign the centre-back and in order to tempt him to join them, Eddie Howe’s side are willing to double his wages.

Carlos has a €75m release clause in his contract, but another report from Marca explained the La Liga side could consider his sale, if they were to receive an offer of about €40-45m.

Reports in England stated the Tyneside club have made a €45m proposal to the Spanish club and are ready to triple the defender’s wages. These claims are relayed by today’s edition of AS, who then provide Sevilla’s stance on this case. 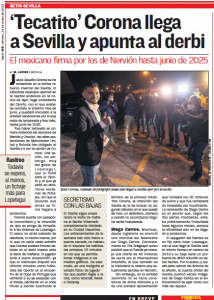 side, but only an initial offer of €30m, which was ‘immediately rejected’ as it was deemed ‘insufficient’.

Carlos is a vital player for Julen Lopetegui and AS adds his renewal was ‘practically finalised a few months ago’. However, it is not yet made official.

A picture of the Brazilian training was published on the club’s official social networking platforms on Thursday.

AS explain this was perhaps done to ‘calm the fans’ of Sevilla after reports of Newcastle’s offer emerged in the past few days.