Home Europe Club have ‘no news of any kind’ in Man City wanting to...
SHARE

Earlier this week, Catalunya Ràdio reported Manchester City’s ‘obligation to get rid’ of Riyad Mahrez, Raheem Sterling and Aymeric Laporte has seen Barcelona emerge as a possible destination for these players.

It was also explained the Citizens would be interested in carrying out an exchange deal with the Catalan club.

Antoine Griezmann’s name was brought up and this was after reports from the English press stated the forward has been offered to the Etihad club.

The La Liga side have been wanting to use the Frenchman in a swap deal for Atlético Madrid’s Saúl Ñíguez, but there has been no progress on this front. He was also linked to Juventus, in exchange for Paulo Dybala.

Thursday’s edition of Mundo Deportivo claim the forward is ‘calm’, despite the constant rumours.

From the Camp Nou, they state the player’s €30m gross salary is ‘not the great obstacle’ to renew Lionel Messi’s contract.

The World Cup winner only thinks of Ronald Koeman’s side and will study an offer, if Barca opens the door for an exit. 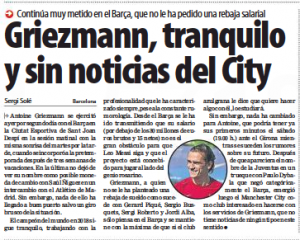 As of now, Barca have ‘categorically denied’ using Griezmann in an exchange deal for Dybala.

With regards to Pep Guardiola’s side emerging as an interested party to take over Griezmann’s services, the report states Barcelona have ‘no news of any kind in this regard’.

‘The air is changing’ – Belief club will sell Chelsea target if he wants transfer, ‘ball officially passed to player’

Player’s entourage have let club know ‘of a preference’ for Tottenham...

‘The air is changing’ – Belief club will sell Chelsea target...

“Sold to Everton” – Pundit says midfielder is heading to Goodison...