Dani Olmo impressed for Dinamo Zagreb in the first half of the season, managing eight goals and registering seven assists in all competitions.

He also had a good spell with the national team in 2019 as the attacking midfielder became a European champion with Spain’s U21 in June and made his senior debut in November.

It’s no surprise that Olmo has caught the attention of top clubs across Europe and Chelsea are one of the sides looking at him, according to Sport.

In the offices of the Croatian club, they have already received a ‘firm offer’ from the Blues for the 21-year-old.

Sport’s report doesn’t provide any figures of the proposal made by Frank Lampard’s side, but mention more clubs could submit offers for Olmo in January.

Barcelona are also interested in the player and with Chelsea already tabling a bid for Olmo, it has ‘forced’ the La Liga winners to move earlier than expected (in the winter market). Their initial idea was to make an approach for him in the summer. 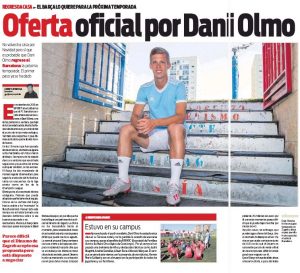 Ernesto Valverde’s side want to make it clear to Dinamo and Olmo that their interest is serious.

It’s unclear whether Chelsea are being used to add drama, and the truth should become apparent in the coming weeks.