On August 30th, we covered a short report from Mundo Deportivo, who explained William Carvalho had turned down an approach from Fulham.

Friday’s edition of ABC Sevilla has a detailed report on the situation, in which they explain the Cottagers were the side that came ‘closest’ to sign the midfielder.

Real Betis ‘eagerly sought the departure’ of the 29-year-old in the final stretch of the summer window as his exit was essential for them make further additions.

The Championship side ‘went the furthest’ after finding an agreement with the Spanish club for a loan deal with a mandatory purchase clause, in the event they get promoted to the Premier League.

However, the Portugal international ‘refused to go to’ Fulham and ‘not even his compatriot Marco Silva’, could convince him to move to Craven Cottage.

Manuel Pellegrini’s side, who tried ‘every possible way’ to get rid of the player, were left frustrated in the end as Carvalho’s refusal blocked them from signing Real Madrid’s Dani Ceballos. 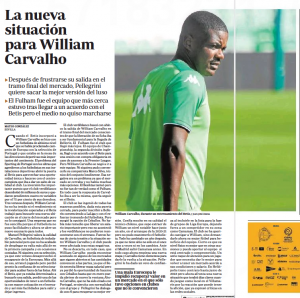 ABC Sevilla state: ‘They were hours of some tension and the situation between William Carvalho and the club may be affected after these refusals.’

It’s not ruled out for Carvalho to still move to a league where the transfer window is still open, but Real Betis will have to wait until January to make an approach for Ceballos.