AC Milan ‘have every intention’ of signing Fikayo Tomori on a permanent deal from Chelsea this summer but will need to qualify for the Champions League to do so.

That’s according to Tuttosport, who cover the player’s future today and state that he has convinced everyone at Milan to make his loan a permanent one.

Tomori has been on loan with Milan since January, having moved when it was made clear he would not be playing a bigger role under Frank Lampard moving forwards.

After something of a difficult start, he has established himself in Stefano Pioli’s team, and the last few weeks have seen numerous reports that they want him permanently.

Milan have an option to sign Tomori for €28m, which Chelsea fans were not happy with when the deal was announced, but it was felt that the Italian giants would look to bring that price down if they could.

That, though, is something Chelsea have no intention of allowing to happen, according to Tuttosport.

They say that the Blues ‘have made it clear’ that if Milan want to sign Tomori, they must pay the full €28m included in his loan deal.

Marina Granovskaia ‘will not offer any discounts’, regardless of the fact that Lampard, who was Tomori’s great champion and opposed a definitive exit in January, has now left the club. 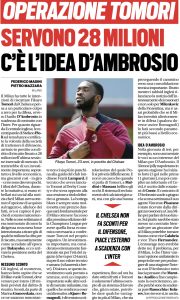 In order to match that price, Milan will need to qualify for the Champions League, but they believe Tomori is an important investment given his age, potential and the ‘technical and human value’ he has.

It’s stated that when it comes to Tomori, Paolo Maldini’s and Frederic Massara’s eyes ‘sparkle’, another indication they don’t want to let him go.

Chelsea, then, can negotiate from a strong position, having made it clear that it will be €28m or no dice, the latter of which would presumably be backed more by the fans than a sale.