This weekend, reports from the English media claimed that Manchester United defender Marcos Rojo could be on his way to Sheffield United.

The Blades’ interest in the 30-year-old was soon covered by the Argentine press, who’ve been pretty interested in his future.

That’s because his former side Estudiantes de La Plata are still hopeful he could go back to the club in the next transfer window.

So when covering Sheffield United’s chase, outlets such as El Dia and Olé take it as a competition for El Pincha, who are ‘dreaming’ of his comeback.

Marcos Rojo started his career at Estudiantes, and in January this year, he rejoined the club on a short loan spell from Manchester United.

Problem is that due to injuries and the pandemic, he was only able to make one appearance in six months at the club, and despite their efforts to extend the loan, that wasn’t possible.

Since Rojo’s contract with the Red Devils expires next summer, the Argentine side now would be hopeful of signing him for free or on a low fee in January, which is likely where Sheffield United, should they actually be interested, will pounce for the defender. 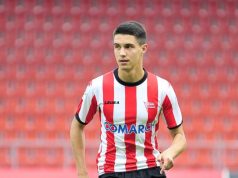