It’s been a while since Tottenham Hotspur were last linked to Robin Koch from Freiburg. It was mostly last summer that the European media said Spurs were after the defender, and the rumour slowly disappeared after that.

But this story is back today, this time coming from the Portuguese media, since they’ve been covering Benfica’s interest in the 23-year-old.

Newspaper Record managed to interview Freiburg director Jochen Saier, who wasn’t very optimistic about the player’s move to the Lisbon side, claiming there are stronger leagues willing to sign him.

“I don’t think Robin opts for Portugal, knowing that there are top clubs interested in Germany and England,” Jochen Saier told Record. 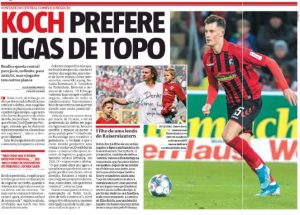 Record later writes that the director knows the player’s valuation should grow at the end of the season, since the likes of RB Leipzig, Borussia Dortmund, Eintracht Frankfurt and Tottenham Hotspur are all interested in him.

“If everything goes as planned, he won’t come out now, only at the end of the season. Freiburg will always try to make the best deal, knowing all the conditions. But we are talking about a young German international with a lot of potential,” said the director.

We’re not entirely sure if that list of clubs came from Record or from Saier in a part of the interview from he isn’t quoted directly. Either way, it seems Spurs’ chase could be back on at the end of the season.