It will come as no secret to Fulham fans that André Frank Zambo Anguissa is having the time of his life at Napoli.

The Cameroon international has taken Serie A by storm since his loan move from Craven Cottage late on in the summer transfer window, and the Italians have wasted no time in letting everyone around them know they want to make the move permanent.

For that to happen, they will need to pay Fulham around €15m, and that fee is almost guaranteed to end up in the Championship club’s bank account before the end of the season.

Corriere del Mezzogiorno are quite clear about it all on Tuesday, explaining that Napoli ‘want to trigger the option to buy’, and reveal that club are in ‘frequent contact with his agent’. 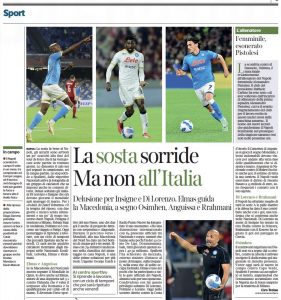 This, to us, suggests a move could be made sooner rather than later, as there would be no need to be in touch with the Fulham player’s representatives unless something was in the works.

For Fulham, who currently sit second in the Championship, the income would likely be a welcome one, allowing them to recoup a large chunk of the initial £22m they spent on the midfielder back in 2018.