Since Udinese did not sign Pablo Mari from Arsenal following the loan spell he’s just had at the club, there are other Serie A sides who’d like to have the defender in the next season.

Hellas Verona have been pointed as one of them, even though it’s known they’d have difficulties to afford it, regardless of a temporary or a permanent move.

The issue is today described by Corriere Di Verona, who claims the local side ‘continue to speak’ to Arsenal about the possibility of this transfer.

The outlet claims the ‘extra-large salary’ Mari has at the Gunners is a problem for Hellas Verona, who’d need the London side to keep paying ‘a large chunk of it’ while having him on loan. 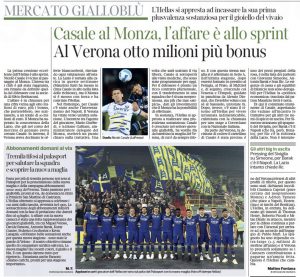 Corriere Di Verona doesn’t point out this time where that’s something the Emirates based club would be happy to do, but a previous report of theirs suggest they wouldn’t be against it.

Following a loan from Flamengo, Arsenal signed Pablo Mari for €6m in the summer of 2020.

The defender, however, fell out of Mikel Arteta’s plans, having then being loaned to Udinese and is now expected to move out of the club once again.

His contract with the Gunners runs until 2024.