Whether he likes it or not, it appears that Dejan Lovren’s time at Anfield is coming to a close.

The Croatia international has struggled for game time at Liverpool under Jürgen Klopp of late, and with Joe Gomez, Joel Matip and, of course, Virgil Van Dijk all in front of him in the pecking order, it might be time for him to try his luck elsewhere.

His contract situation (he has one year left) works in his favour too, as the Premier League leaders will need to sell him while they still can this summer, and AS Roma are among those potentially willing to welcome him.

On paper, he makes perfect sense for them if they cannot keep Chris Smalling, as he’s experienced and wouldn’t cost a whole lot.

Gazzetta dello Sport look at the situation on Friday, and believe he would only set Roma back €10m or so, which is well within their summer budget, with or without Champions League. 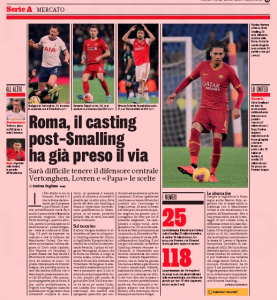 It’s stated the Italians ‘continue to keep the contact alive with his entourage’, with whom they already negotiated last summer, even if nothing came from said talks.

He’s certainly on their list and while he might not be at the top, he’s a name likely to pop up at least once a week in the Italian press, so we’re warning you now.