For the past two days, reports from Italy stated Udinese are interested in Wolverhampton Wanderers’ Patrick Cutrone.

Gianluca Di Marzio explained on Friday the Serie A side are ‘getting closer and closer’ to signing the striker.

It was also explained an unnamed Spanish side had positioned themselves for the Wolves man.

Multiple reports coming out of Italy and Spain are now claiming the 23-year-old is getting closer to Valencia.

According to TuttoMercatoWeb, the former AC Milan man is expected to join Los Ches on a loan deal until the end of the season. Any possible inclusion of a purchase option will be discussed later in the summer.

Calciomercato explain Cutrone is ‘ready to pack his bags’ again. There was a ‘blitz’ from the La Liga side to take the Wolves frontman and close the negotiations with Nuno Espírito Santo’s side for a loan deal in ‘no time’.

Cadena Ser journalist Fran Guaita told El Larguero that Cutrone is in the ‘spotlight’ for Javi Gracia’s side. 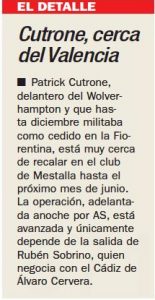 It’s claimed the operation is ‘advanced’ and ‘only depends’ on the departure of Rubén Sobrino to Cádiz. The negotiations are ongoing for the latter’s transfer.