For the past half a year or so, Mikkel Damsgaard has been linked with Tottenham.

It started when José Mourinho was manager, failed to disappear when Ryan Mason took over and has continued throughout and after Fabio Paratici’s appointment at the helm of the transfer ship in north London.

Since then, the Denmark international has showcased his ability at the Euros, scoring a great goal in the process, which certainly won’t have helped Tottenham in their endeavours.

In fact, the player’s price tag used to be somewhere around €20m, if previous reports were to be believed, but that has since more than doubled, according to Sampdoria’s chairman Massimo Ferrero.

Relayed by Gazzetta dello Sport, he made it clear that only a huge fee would convince him from parting ways with his prodigy. 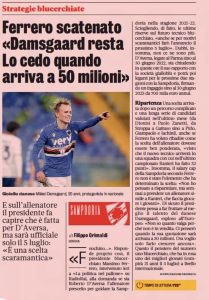 He said: “I don’t know how much he is worth because he’s not for sale. We’ll think about when his value will have reached €50m. Now, I want him to make him grow some more”.

By that, he meant that until someone puts €50m on the table, Damsgaard isn’t for sale, and even then he still might not be.

That’s a stark warning for the likes of Daniel Levy and Paratici, who probably should have considered bringing him in before his explosion on the International scene.

Then again, they still haven’t found a manager for Tottenham, so that’s likely their priority for the time being.