That’s according to Corriere Della Sera, who back up reports elsewhere in Italy that the Serie A side are keen to sign the Englishman when his loan deal expires.

Tomori has been on loan with Milan since January, having elected to leave Chelsea after struggling for game time under previous manager Frank Lampard.

He’s proven to be a big hit since his arrival, with seven appearances in all competitions to his name so far.

Milan have been impressed by what they’ve seen from the 23-year-old and the last few weeks have seen him mentioned regularly in the Italian media.

This week things have picked up considerably, with it claimed that Milan have already initiated first contacts about a permanent move and club chief Frederic Massara even admitting they are ‘convinced’ about the player and evaluating a move. 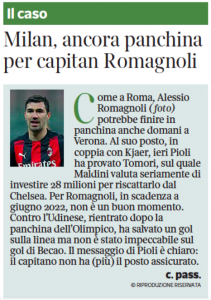 All of this comes in a small article on Alessio Romagnoli, with it explained that the Milan captain is no longer guaranteed a starting place, with Stefano Pioli recently pairing Simon Kjaer with Tomori instead.

That shows the faith that the Milan manager has in the Chelsea loanee, something which has seemingly been passed onto his superiors.

This is somewhat backed up by Corriere dello Sport, who explain how ‘the only really positive winter engagement’ for Milan was Tomori.

All his appearances so far have been positive and enough to ‘fuel the idea’ that he can be a starter in the team moving forwards.

‘The problem’ for the club is that €28m it will take to sign him permanently from Chelsea, with it hinted that is too much for the Serie A side to afford at this moment in time.

That scales back what Corriere della Sera are saying somewhat, although what both clearly agree on is that Tomori is making a positive enough impression that Milan are seriously considering trying to get him permanently.