Almost immediately after it was announced that José Mourinho would be taking over from Paulo Fonseca at the end of the season, Jorge Mendes clients were being shipped off to AS Roma in newspaper column inches.

One of the first names to appear was that of Rui Patricio, currently at Wolverhampton Wanderers, as the goalkeeper position is one needing a lot of work at the Serie A club.

Managed by Mendes, which is how he ended up at Wolves in the first place, the Portuguese shot stopper is one of the names Roma’s general director Tiago Pinto is currently ‘evaluating’.

With David De Gea, Mourinho’s ideal signing, out of their price range, the Italians have had to fall back onto other, more affordable names, in which the former Sporting CP man is included. 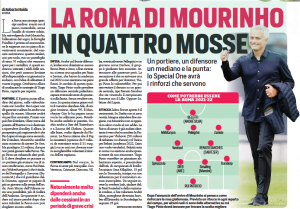 According to Corriere dello Sport, Pinto is now see-sawing between two different kinds of profile for to replace Pau Lopez: either an ‘experienced’ man, with the Wolverhampton goalkeeper mentioned alongside Yann Sommer, or someone younger, such as either Juan Musso or Pierluigi Gollini.

It’s definitely a story to keep an eye on, because we all know how Jorge Mendes likes to move his clients around from time to time, and with the Serie A side clearly keen to please Mourinho in the coming months, a transfer could be on the horizon for the Wolves man.