As you might have seen over the past few weeks, Chelsea’s Ruben Loftus-Cheek is attracting interest from Lazio.

The midfielder was sent out on loan to Fulham last season, but with the Cottagers now relegated back to the Championship, a return to Stamford Bridge will take place, giving Thomas Tuchel a chance to decide what he wants to do with the 25-year-old.

Should he not have any use for him, a new club will need to be found, which is where Lazio, who now have Maurizio Sarri as their manager, come in.

The Italian was a keen advocate of Loftus-Cheek during his time in charge at Stamford Bridge, which is exactly why the player is ‘the hottest name’ on the wishlist when it comes to reinforcing the midfield, according to Corriere dello Sport. 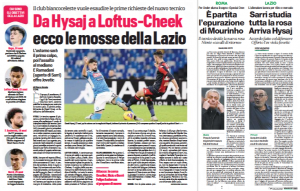 Those that follow are Sampdoria’s Morten Thorsby and Spezia’s Matteo Ricci, but it appears to be the Englishman that Sarri wants above all others.

Whether that happens remains to be seen, but the general consensus is that a loan deal would be needed to accommodate his arrival in Rome.

Down their end, Il Tempo report that the ‘channel is open’ with Chelsea regarding a deal for both Kepa Arrizabalaga and Loftus-Cheek.

Something to give their readers hope, maybe, but the interest clearly is there.