Struggling to have the same impact at Leicester City as his compatriot Youri Tielemans, Dennis Praet was sent on loan to Torino for the season.

The Belgian knows Serie A well, having thrived there at Sampdoria in the past prior to his move to the King Power Stadium, and he is slowly establishing himself under Ivan Juric.

The midfielder scored his first goal on October 30th in a 3-0 win over his former club, and should his form continue, the Italians could end up paying some money to the Foxes.

That’s because they loaned him with an option to buy, but the amount needed was never really revealed until Gazzetta dello Sport mentioned it on Tuesday. 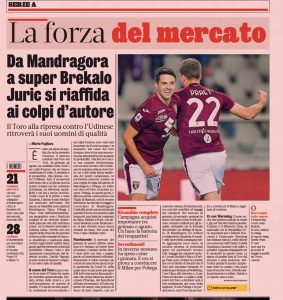 They claim that Torino can get Praet for €11m at any point during the loan, and ‘the ball is in the Toro’s hands’, with the deciding factor being his ‘output during the year’.

There’s no early suggestion they will make the move permanent, but if they do, it will allow Leicester to recoup some of their original £17.3m expenditure on the player back in 2019.