Ousmane Dembélé is out of contract at Barcelona at the end of the season and his future is likely to be away from the Camp Nou.

On Thursday, we covered claims made in the Catalan media that Chelsea have held talks to sign the winger. It was also explained the Blues have ‘decided to go with everything’ in order to get the deal over the line in the summer.

Friday’s edition of Sport has a report on the 24-year-old, titled: ‘Case open, case closed’.

The ‘case open’ is in reference to Xavi Hernández wanting to rely on the player until the end of this campaign, after he refused to leave Barca in January. The case is ‘closed’ because the La Liga side are planning the future without the France international.

In addition to this, they have no plans to make a new offer to the ex-Borussia Dortmund man and ‘less to his representative, Moussa Sissoko’.

The newspaper states ‘the anger with the attitude of both, for months and months, still lasts. And it will hardly be forgotten’. 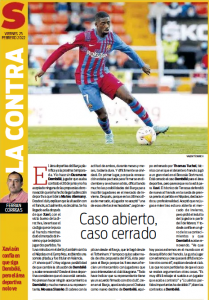 Dembélé decided against leaving the La Liga side in the winter market and will now join a new club as a free agent in the next window.

Sport explain ‘everything indicates’ his agent has ‘already signed an agreement’ with another club. That club is believed to the Champions League winners.

It’s claimed that from Barcelona, they are ‘betting on Chelsea’ to be the attacker’s next destination.

If the player were to join the Champions League winners, he will reunite with his former manager, Thomas Tuchel.