As Benfica wait for the right time to make a move for Wolverhampton Wanderers’ Ruben Vinagre, it seems the opportunity is now edging closer.

The Eagles’ idea is to sell left-back Nuno Tavares first, and as reported today by newspaper O Jogo, the club are currently analysing a bid from Napoli for the player.

Once they get to complete the outgoing move, then they go for the ‘long identified’ replacement, and that’s where Vinagre comes in.

O Jogo writes that Benfica believe they have the signing of the Wolves player ‘controlled’, despite competition from local rivals Sporting. 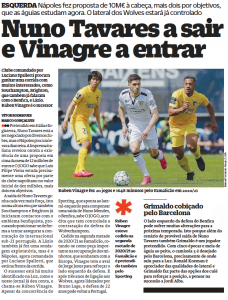 ‘Controlled’ is the same word used by other outlets such as Jornal de Notícias, who write that the Molineux side will demand at least €15m for the move.

Vinagre has just had a loan spell at Famalicão, and his good form at the Portuguese side is what drew interest from the two Lisbon giants.

It still isn’t clear if Bruno Lage would give him another chance to prove himself at Wolves, as he still has a contract with the club running until 2024.