The article focuses on the fact that Benfica are now getting more money with his time at  the Baggies. There had been an initial payment of €800k for the temporary move, and now with the access to the top flight, there’ll be a bonus of €200k.

But what West Brom fans are probably really interested in is the chances of having Krovinović in the squad for next season, and Record has some information about that as well.

It’s claimed that the Baggies will try to keep the midfielder in their squad, and Benfica are already aware of the English side’s intention. 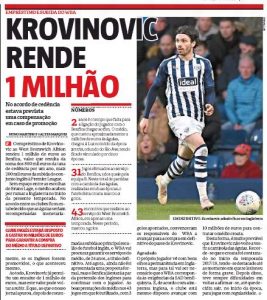 Although it’s claimed there’s no bid for the permanent move yet, Record shows some optimism that West Brom could get the signing.

They first say that Krovinovic would ‘see with good eyes’ his stay at the English side.

And given reports from England saying the Baggies could offer €10m for his transfer, Record writes that it would be ‘very likely’ to be a successful operation in that case.