Leicester City are owned by the King Power International Group and the Bangkok based organisation purchased Belgian side Oud-Heverlee Leuven in May 2017.

OH Leuven were struggling financially in the second tier of Belgian football when the Foxes’ owner took charge of the club.

They were promoted to the Jupiler Pro League this season and have enjoyed a good run under Marc Brys’s guidance in the ongoing campaign.

OH Leuven are ninth in the table with 37 points, two points behind fifth placed KV Oostende and four behind Anderlecht, who are in fourth spot.

They are in contention to qualify for next season’s Europa League play-offs, but could be forced to miss out on the competition.

According to Het Nieuwsblad, OH Leuven ‘cannot play European football’ next season if Brendan Rodgers’ side qualify for either the Europa League or the Champions League. 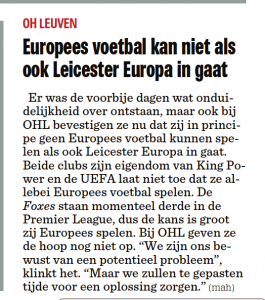 Both the clubs are owned by the King Power International Group and the newspaper states UEFA doesn’t allow them ‘both to play European football’.

The potential problem set to be caused by Leicester is also confirmed by OH Leuven, but they haven’t given up yet.

“We are aware of a potential problem. But we will find a solution in due time,” Het Nieuwsblad quoted OH Leuven as saying.