Porto are ‘keeping an eye’ on Manchester United defender Alex Telles should he be allowed to leave the club this summer.

That’s according to Correio da Manha, who says the Brazilian seems to have his ‘days counted’ with the impending arrival of Erik ten Hag.

The Dutch coach is expected to revolutionise the current Manchester United squad, with a long list of players likely to be shipped out of the door as part of the overhaul.

The defence is likely to be one of the areas most affected, and according to the newspaper, Telles is one of those who could be moved on.

He still has two years on his deal at Old Trafford, but Porto are ‘attentive’ to the possibility of him being moved on. 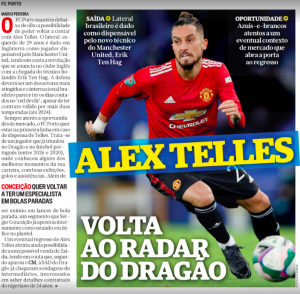 Telles already ‘triumphed’ at the club between 2016 and 2020, when he made the move to Manchester United, and Porto would be happy to reunite with him, particularly as manager Sérgio Conceição is looking for a set-piece expert.

A move for Telles would also open up the possibility of selling Zaidu Sanusi, who has received proposals from other clubs.

Thus it makes sense on all fronts, although they’ll only move when it’s clear Manchester United want to get rid, which is yet to be decided.