With Cristian Romero edging ever closer to a move to Tottenham and the likes of Toby Alderweireld, Joe Rodon, Eric Der, Japhet Tanganga and Davinson Sánchez already at the club, someone will have to make way.

According to TuttoMercatoWeb, that person might be the Colombian, whom Spurs were apparently willing to include in the deal for the Argentine, which Atalanta decided against.

They have their eye set on Merih Demiral as the replacement for Romero, but that doesn’t mean the Tottenham defender will be stuck in north London.

The Italian website explain there is a ‘very strong pressing’ from Sevilla in La Liga for Sánchez, although they aren’t the only ones, with ‘a few Premier League clubs’ also sniffing around.

Right now, nothing is done, although reports do suggest that Romero could soon follow Pierluigi Gollini in swapping Atalanta for Tottenham, with the English side, through Fabio Paratici, prepared to offer up to €50m with bonuses for the centre-back. 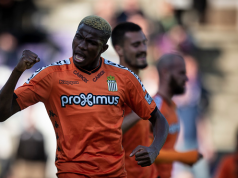