It appears that Lucas Torreira is finally heading towards leaving Arsenal for good.

The Uruguayan found himself exiled following the appointment of Mikel Arteta, and the midfielder was sent last minute on loan to Atlético Madrid, where he didn’t have the best of times.

A return to the Gunners’ first-team was never on the cards when that deal expired, meaning a new landing spot is now needed for the 25-year-old.

He seems to have found that in Lazio, where Maurizio Sarri would be happy to work with him as he prepares to implement his 4-3-3 at his new club.

Il Tempo explain the player is ‘close’, as there appears to have been an ‘acceleration to get to Lucas Torreira’, seen as the missing regista, whom Arsenal are asking €20m for.

Down their end, Lazio are ‘prepared to arrive at €15m (payable in two goes)’, while a €3m/year bonuses included contract was offered to the player.

Corriere dello Sport go with a very similar line in both their website and their newspaper, headlining their article with a claim that the Serie A side and Torreira are ‘very close’.

They have the same figures as Il Tempo but a different formula from the Italians’ end, with Arsenal wanting €20m payable in two instalments, while Lazio want a loan with a view to buy at €15m (or €16m if a few bonuses are triggered). 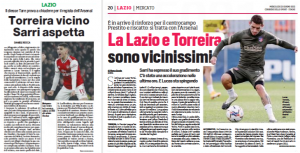 In fact, the parties are ‘very close’, as the desire of everyone is ‘to reach a happy ending’, and the ‘boy has already said yes’ to the move.

Torreira was ‘one of the names indicated by Maurizio Sarri in his famous confrontations with the director of football Igli Tare a few days ago’, and the club are now trying to ‘satisfy him’ by bringing the Arsenal man in.

This, by all accounts, appears to be heading in the right direction.