Tottenham were willing to pay as much as €90m to sign Lautaro Martinez from Inter Milan this summer, an offer that far surpassed what Arsenal were going to pay.

That’s according to Gazzetta Dello Sport, who cover the situation around the Argentine striker now he’s remaining at Inter.

As you may remember, the Argentine was heavily linked with a move away from Inter throughout the summer as the club’s ownership pondered selling their biggest talents to raise money.

Arsenal and Tottenham were both heavily linked with a move, particularly the latter, who were going to need a replacement for Harry Kane if he joined Manchester City.

Bids were believed to have arrived from both, and Gazzetta confirm that was the case, stating that Inter rejected three offers this summer.

Two of those were from Tottenham and Atlético Madrid, who were both willing to pay as much as €90m to make a move happen. 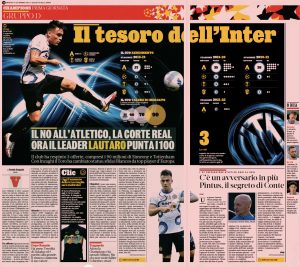 Then there was Arsenal, who were also keen and ‘delivered’ an offer, although that was lower than what the other two were bidding.

All three offers were rejected, though, indeed the door ‘has never been opened’ as Inter rejected any attempts after losing Romelu Lukaku and Achraf Hakimi.

That’s because those at the club are convinced Martinez can continue to rise at the club, meaning at some point in future, the bids will go beyond the €100m mark.

Thus turning down the bids this summer makes sense, although we’re sure Tottenham fans will be pleased to know they were willing to outbid Arsenal at least.