Despite claims from England that Alphonse Aréola is close to a move to West Ham, the French press are of a different mind.

Le Parisien look at what the arrival of Gianluigi Donnarumma means for Paris Saint-Germain going forward in the goalkeeper department, and touch upon the France international’s future.

Recalling he was sent to Fulham on loan last year, where he had a good season and ‘enjoyed life in London’, the newspaper also state he ‘would like a new contract’ in the city, this time with West Ham.

That’s when they discuss the English claims of an agreement being close, before adding that, according to their information, ‘we are far from that’. 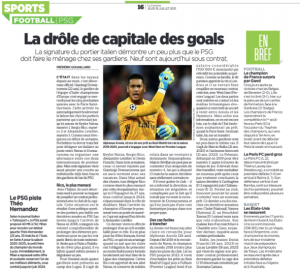 The reason behind this delay is that West Ham ‘would like a loan’ for the player, much like Fulham got last year, while Paris Saint-Germain, conscious the 28-year-old has a decent value in the Premier League after his time with the Cottagers, ‘want a transfer’.

There’s no fee mentioned, but with two years left on his deal, a renewed status and his best years ahead of him, we can’t see the Ligue 1 runners-up being too kind with their demands.