Robin Gosens made eight appearances for Atalanta this season and last featured for them in September, in his side’s 1-0 win over Young Boys in the Champions League.

The left wing-back has been sidelined with an injury since then, but that has not stopped him from attracting interest from Newcastle United.

Sunday’s edition of Tuttosport claimed the Magpies have ‘reached an agreement’ with the 27-year-old for a deal worth €3.5m per year. They need the approval of the Serie A side and also ‘guarantees’ on the player’s physical conditions to carry out the signing.

Prima Bergamo, a website dedicated its coverage on the Italian club, now claim ‘there is really the interest’ of the Tyneside club to sign the Germany international. ‘There is no doubt’ a solution can be found, if Gosens ‘accepts the destination’.

They dismiss claims made by Tuttosport by stating it is ‘absolutely not true’ the player has accepted Newcastle’s proposals. On economic level, there are no doubts as Gosens can ‘quadruple’ his salary if he accepts the offer [€4m per year] made by Eddie Howe’s side.

Leicester City were chasing the player last summer, but a deal couldn’t be agreed between the two clubs. Gosens, for his part, wasn’t keen on joining the Foxes since they were not offering Champions League football.

‘It is not only the money that counts, but also the objectives’ and this could ‘seriously become the point of the matter’ for Newcastle to sign Gosens. 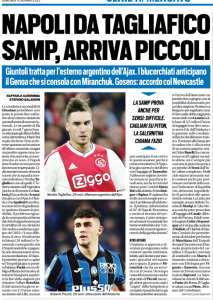 The Premier League side have offered ‘a lot’ to the German since they are ‘very interested’ in him.

However, their league position [19th] and the risk of relegation means they will certainly not make it to the next season’s European competition. This could see Gosens risk making it to the Qatar World Cup with the national team.

The German ‘cares a lot about this’ and has ‘never made a secret of it’. This factor could block Newcastle from convincing Gosens to join them in January.