Torn between Maarten Stekelenburg and Joel Robles last season, Ronald Koeman appears to still be looking for his number one goalkeeper.

Never really finding a long-term option since the departure of Tim Howard, the Toffees seem to be looking around Europe for their next number one, and Le10 Sport in France reckon one man has definitely caught their eye.

Saint-Etienne’s Stephane Ruffier has been one of the stalwarts of Ligue 1 goalkeeping over the past five years or so, missing his first games since 2011 this season with a groin injury.

This consistency has caught the eye of more than one Premier League club, including Everton, with Le10 Sport reporting Koeman’s side appear to be the most interested of the bunch.

It’s worth noting this isn’t the first time Ruffier has been linked with a move to Goodison Park, with French journalist Manu Lonjon, who tends to be fairly reliable, explaining the Toffees had been scouting him throughout the season back in March. 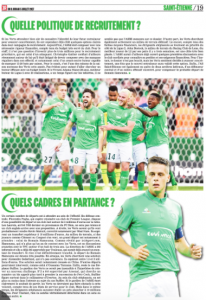 At 30, and with big changes happening at Saint-Etienne this summer, this could be the perfect time for the three-time capped France international to try something new in his career.

A steady job at Everton could certainly be the ideal place for him to go, far better than Arsenal, where he was suggested as being an option to replace the departing David Ospina.