Wednesday’s edition of Mundo Deportivo has a report on João Félix stating that he is ‘non-transferable’ for Atlético Madrid this summer.

The newspaper also provides a short snippet on the clubs that wanted the 21-year-old and that’s when Barcelona and Manchester United are mentioned.

It’s claimed the Catalan club raised the possibility of allowing Antoine Griezmann return to the Wanda Metropolitano in exchange for the Portugal international.

This option was raised a few months and the former Benfica star’s topic was brought up again when the two clubs were discussing a swap deal involving Griezmann and Saúl Ñíguez.

Mundo state Félix’s sale is ‘non-negotiable’ not only for Ronald Koeman’s side, but for anyone who is interested in him, including the Red Devils.

As per the report, the Premier League side made a ‘great offer’ months ago, but United’s proposal was ‘rejected’ by the Spanish champions. 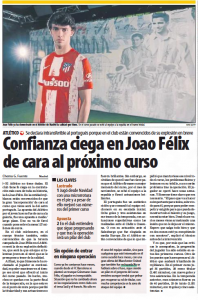 The newspaper doesn’t categorically specify as to when Atlético turned down the ‘great offer’ from the Old Trafford club.

Mundo add ‘there will be no talk’ about the player leaving Diego Simeone’s side because he ‘continues to be a pillar’ of their project.

Félix, however, will have competition next season and he will have fight to cement his place in the starting lineup.