Manchester City and Chelsea ending their pursuit to sign Erling Haaland has come as encouragement for Real Madrid, reports Saturday’s edition of AS.

The Premier League winners and the Blues are ‘at the forefront of those interested’ in the Borussia Dortmund star.

The ex-Barcelona manager publicly confirmed his side’s interest in Tottenham Hotspur’s Harry Kane, which could be a sign the Citizens are not willing to make an effort to land Haaland.

Chelsea, for their part, have shifted their focus to re-signing Romelu Lukaku and have made progress in acquiring the Inter Milan striker’s services. 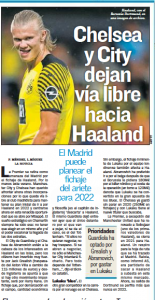 Mino Raiola advises the Norway international and the newspaper states the super-agent was in ‘favour of putting Haaland up for auction this summer’.

However, his main suitors from England, City and Chelsea, ‘withdraw as a threat to Real Madrid’. This is a ‘respite for the roadmap’ laid by the La Liga side in signing the BVB frontman in 2022.

With Manchester City and Chelsea focusing on landing Kane and Lukaku respectively, AS are of the belief the Premier League duo ‘make way’ for Real Madrid to sign Haaland next summer.